No grass can equal modern Ryegrass in its ability to rapidly produce thick, handsome, durable turf. Ryegrass is the world's most widely used grass and its ability to germinate in 7-10 days (even less under ideal conditions) is legendary. A cool-season grass, Ryegrass is widely used in northern regions for permanent turf and for the overseeding of dormant turf in the southern United States. Ryegrass is preferred by homeowners because it produces a dark green turf which rapidly develops a strong root system, responds rapidly to fertilization, never needs pampering and is not subject to disease problems which plague some Kentucky bluegrasses.

Because Ryegrass does not creep, as do some grasses, it is often combined with quality fine fescues and bluegrass to produce fine turf with the advantages of genetic diversity. Ryegrass performs in a wide variety of soil types and will do well in clay or compacted areas which are not subject to heavy use. Ryegrass is especially popular for sports turf and has been used in the Rose Bowl, Los Angeles Coliseum, the Super Bowl and on many of the world's finest golf courses. 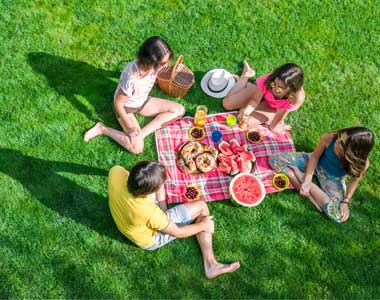 Oregon-Grown Ryegrass is a Versatile Grass

Available to the homeowner are numerous very high quality, dark green, fine-bladed turf-type ryegrasses which are marketed by brand name as well as Linn Perennial, a "workhorse" variety which is lighter green and has broader blades. The turf-type varieties are highly recommended for uses where quality is paramount while Linn is a good choice for less showy turf. Annual Ryegrass is used primarily for winterseeding dormant southern turf or where short-term rapid cover is desirable.

Home lawns created with Oregon-grown Ryegrass have many benefits beyond traditional good looks. A healthy lawn reduces the need for pesticides to control weeds and other unwanted vegetation. When overseeding your existing lawn with Oregon-grown Ryegrass it takes surprisingly little water for seed germination and maintenance of your lawn during the winter months. In addition lawns can help cool the environment. On a hot day, the surface of a lawn can hover around 75 degrees Fahrenheit, while a sidewalk or street can be well over 100 degrees Fahrenheit. Finally, a healthy lawn 50' x 50' produces enough oxygen for a family of four.

Reduces need for pesticides to control weeds and unwanted vegetation. A healthy 50' x 50' lawn produces enough oxygen for a family of four. Requires less water for germination and maintenance during winter months. Helps reduce surface temperatures as opposed to asphalt or concrete.

7 to 10 days is normal, even less under optimum conditions.

A healthy, lush lawn adds curb appeal, which can really pay off. Buyers suggest that a lawn in top shape can add as much a 15% to a home’s value.

Here are some useful publications.